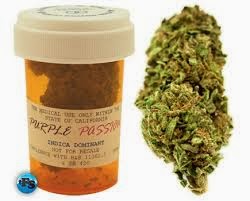 It looks increasingly likely that Washington’s legislature will approve new restrictions on medical marijuana by the end of its current session a week from Thursday. The two leading bills both involve mandatory registration of patients, sharp reductions in the limits on possession and home cultivation, and elimination of “collective gardens,” including hundreds of dispensaries operating under that label. The general thrust of the bills is to ban the untaxed, unregulated outlets that otherwise would compete with state-licensed pot shops, which are supposed to become the main source of medical marijuana. Patients have several concerns about that plan. Please click here to read more.
Marijuana: Do Risks Outweigh Benefits in RA?
Rheumatologists should not currently be recommending the use of medical marijuana to their patients for relief of chronic pain, researchers stated. Among the reasons for this advice are acute and chronic risks, a lack of evidence for efficacy, and the absence of data on appropriate dosing, according to Mary-Ann Fitzcharles, MD, of McGill University in Montreal, and colleagues. Please click here to read more.
Medical marijuana ad released
The first-ever medical marijuana commercial has aired on US television, likening buying the drug to sushi.
In the ad, released by Marijuana Doctors, a suspect looking seller asks the camera: "Yo, you want sushi?" He then runs through a list of the raw fish delicacies, pulling out tiny slabs of raw tuna and raw salmon from his overcoat: "I got the finest sashimi this area's seen in years". The commercial continues with the seller telling the camera that "you need me and I need you" before he discretely hands a tuna roll over to a passerby. The ad ends with a voice over telling the audience: "You wouldn't buy sushi from this guy, so why would you buy your marijuana from him?"
Medical marijuana has been legalized in several US states but it is still illegal under federal US law. Click here to view this commercial.
‘Mommy lobby’ emerges as a powerful advocate for medical marijuana for children
Standing in a Wisconsin State Capitol hearing room surrounded by parents hugging their seriously ill children, Sally Schaeffer began to cry as she talked about her daughter. Born with a rare chromosomal disorder, 6-year-old Lydia suffers from life-threatening seizures that doctors haven’t been able to control despite countless medications. The family’s last hope: medical marijuana. Schaeffer, 39, didn’t just ask lawmakers to legalize the drug. She begged. Please click here to read more.

Q&A: Pot legalization booster Ethan Nadelmann makes his case
On Aug. 19, Alaskans will vote on whether to legalize marijuana.
On Wednesday night, those in Anchorage will have a chance to hear from Ethan Nadelmann, the man known as the single most influential architect of the decades-long movement to decriminalize pot -- a movement that's been picking up steam in recent years with legalization victories in Washington and Colorado. A 56-year-old New Yorker with a handful of degrees from Harvard, Nadelmann is credited for engineering a national strategy that has sought to frame regulating pot sales as a generator of tax revenues and a way to refocus law enforcement on policing serious crime. Rolling Stone magazine called him "the driving force for the legalization of marijuana in America." Please click here to read more.
Legalizing Medical Marijuana Gaining More Momentum in Mid-Term Election Year
Plandai Biotechnology (otcqb:PLPL) is one of a handful of publicly traded companies that are eagerly anticipating the legalization of medical marijuana nationwide. Currently the drug is legal medicinally in 20 states and Washington, D.C., but in this election year, that number is likely to grow. In each national election year, the frenzy begins again and with it, a growing momentum that has the U.S. drawing closer to a nationwide acceptance. Between dramatically shifting polls, Dr. Sanjay Gupta's documentary Weed that highlights a number of patients who saw stunning improvements after using medical marijuana, and an uptick in activity in the Obama Administration, momentum is at an all-time high in favor of legalizing the drug. In November, mid-term elections will see voters heading to the polls to take up the legalization issue on a number of state ballots including Florida and Alaska. Please click here to read more.
Posted by NCADD of Middlesex County, Inc. at 7:40 AM